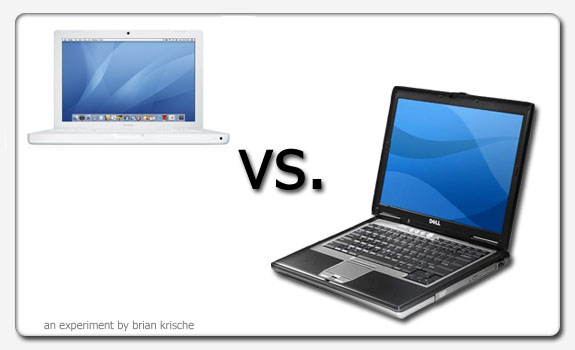 Due to the recent media hype surrounding the new MacBooks and the lack of actual experimentation, I decided to take matters into my own hands. Since I work in the IT department of a factory that uses all Dell computers, I was able to borrow a brand new Dell Latitude D620 for a few hours. Also readily available to me was an Oakton InfraPro infrared thermometer and my very own MacBook.
There has been a significant negative response to the amount of heat emitted from the MacBooks. Since I own a MacBook, why not put it it to the test!

The test would involve playing the movie “The Hills Have Eyes” for the entire length of the movie.
Although not the most CPU intensive test in the world, I thought it was much closer to the average use of a laptop. So each laptop was to play the movie without interruption while running from battery power. I would check the temperature of four zones on both the top-side and bottom-side of the laptops. I would record the temperatures upon the successful start up of the operating system, after one hour of playtime, and at the end of the movie (1 hour 45 min). 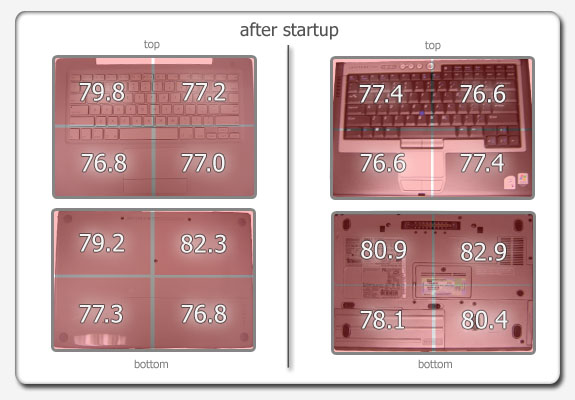 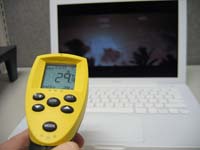 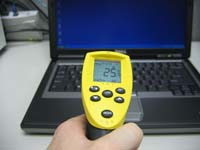 I managed to get a little bored while letting the DVD play, so I decided to test the thermometer on other objects in my cubicle. 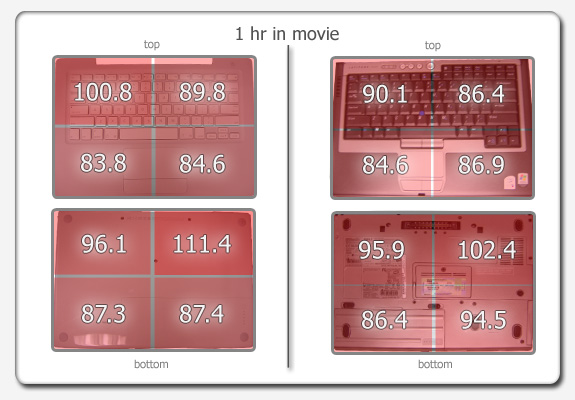 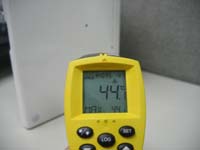 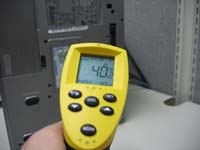 I noticed that for both laptops, the bottoms were warmer than the tops. I find this rather discouraging since it is a laptop and the bottom of it does go on your lap. However, I’m sure this is just due to the fact that the heat on the bottom of the laptop was trapped between the laptop and table. 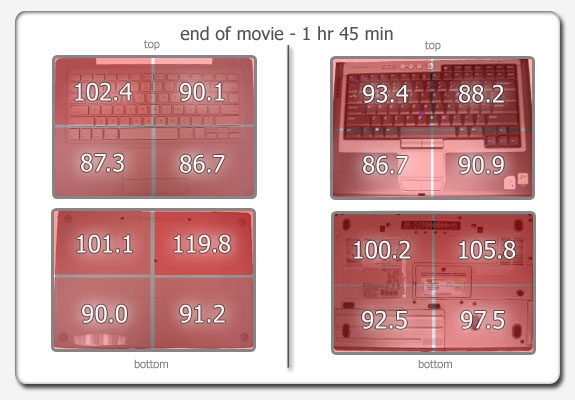 It appears that the MacBook runs significantly hotter than the Dell. However, my scientific expedition did not end there. I graphed the average temperature of each laptop for the times checked. 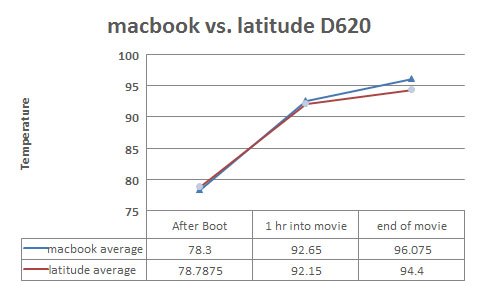 In the end, it appears to be that, in certain spots, the MacBook is significantly hotter than the Dell, but its average temperature is very close to that of the Dell. Take this information as you will. I ensure you that both laptops were checked with the upmost scruitiny. In my opinion, I think that the MacBook is a great alternative to the PC dominated computer market. It does run a little bit hotter than the dell, but I remind you that the MacBook lacks cooling fans that are built into the Dell.

mundane is my life View all posts by krische